Posted about two years ago by Jeff Lane

(Fountain City, IN)--An emailed statement has been received by Kicks 96 and the Point News by someone identifying himself as Northeastern High School Principal Wes Wisner.  In the email, Wisner said "I wholeheartedly disagree with the steps being taken to remove me from my position as high school principal and wholeheartedly disagree that there are legitimate grounds upon which to base my removal."  Wisner goes on to thank those who have reached out to him in support.  Wisner appears to be on the verge of being fired.  A letter to Wisner from Northeastern administrators accuses Wisner of insubordination and neglect of duty.  Several school employees had filed complaints against Wisner.  Those complaints allege Wisner intimidated them and made them feel unwelcome.  He allegedly made one administrator cry.  Wisner was given a timeline to meet with both the superintendent and school board.  The board would ultimately approve the cancellation of his contract. 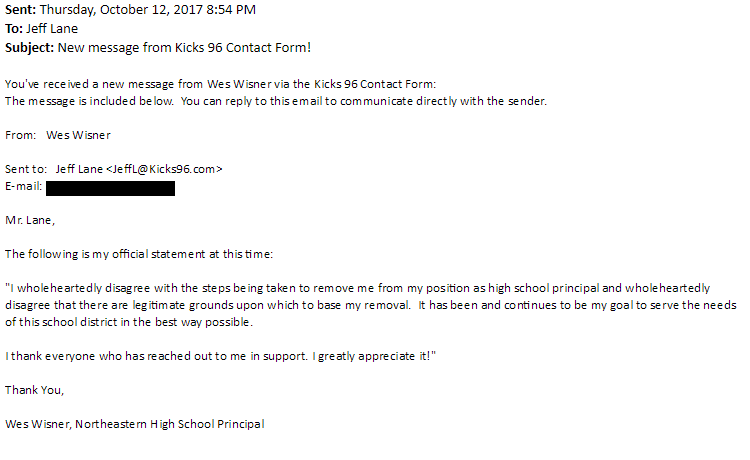 Read All
Richmond, IN WEATHER